NEW ALBUM
VENETIAN CELLO SONATAS Under the Shade of Vivaldi 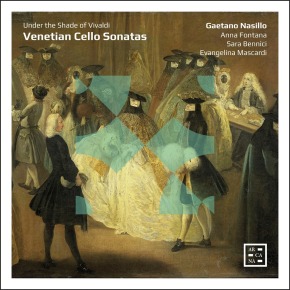 Outhere Music announces the release of Gaetano Nasillo‘s new recording, paying tribute to the violoncello, a bass instrument that developed in the late 17th Century and reached a peak of popularity in the Venezia of the 1730 and 1740’s. A tireless explorer, Gaetano Nasillo wanted to give an idea of all the musical possibilities that Venetian composers saw in this new instrument and chose eight works that are connected to La Serenissima, composed by Vivaldi, Bassani, Stratico and Martinelli.